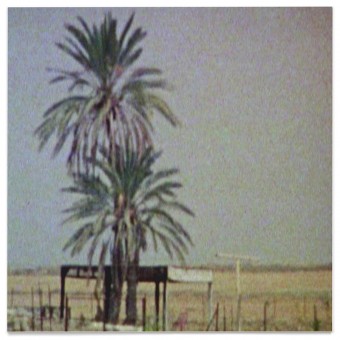 As periodic oscillation, however unstable, articulates a simulacrum of Unity, an “As Above, So Below” episode transpires, with sine-wave fantasias and Calgon-take-me-away-isms combining to help us enervate the lumpen buzz of being. It is via this impulse, and in particular its minor 21st century iteration, that we remain tethered to the supraliminal glamour of the inertia inherent in reflection, in stasis vs hyperkinesis/ADD, and in the “Eternal Now” of Tillich, Watts, Msafari Don Cherry &c. This LP is just such a participle iteration. That Messrs. Warren and Burch as secular rockists employ the likes of the Marx Ukelin along with sundry consumer electronics and up-market dry syrups, we have here a less deontic, more methylated “miracle” in the making. Which is not to say that this Camino de Santiago is without its own Maestro Canches or Abraham of Worms, rather quite the contrary; the temple veil has been rent asunder, and Et in Arcadia ego. You are holding weight in naphtha, lanolin, turpentine, Carnauba wax, gum arabic, ethylene glycol, carbon black and aniline yellow, with ample quantities Smilax ornata, and potassium nitrate to burn. What happens next is up to you.

Preparations, indulgence, exfoliation, re-entry. If a common point exists between the pure liquid sonics of Ned Lagin’s Seastones and the grey speed trials of The Theater of Eternal Music then perhaps this is it, though these of course are different times. An unquiet breeze through a foreign window, stirring complacent drapery; this room has always been here, it is we who have only just arrived. What is it that compels our attention here and now, again and always?

Set aside, found in fog, however allayed, we sit…

Our meandering prose a far cry from insurrection we sit…

With an aseptic smile bolstering our blind-faith-over-charity erratum we sit, garnering followers, checking our pronouns, and ambulating recreationally, while tape-label taxidermists resuscitate the new age and a veritable Micronesia of sub-genres hold iffy sway at best. And if, as it was in the beginning and it still is news (if not even more so now) that heroes are hard to find, then we go it alone, ipso facto, jet plane in a rocking chair and a handful of holes &c. But should the conscience ever really be converted into palms, the windy citherns’ hankering might well resemble what we have here, which (rather than a failure to communicate) is a limpid triptych of collated sonorific impulse, made by men, sans greed or intellectual vanity. And if so, then this chapel’s lights stay lit tonight, and for now a Maran’athah as yet unuttered gets hung once more in silent flight.

Recorded over a the course of a scorching Summer in a cramped apartment on East Village’s seventh street, Tres and Jeff improvised what was to be their first and last collaborative LP. Pressed shortly before Tres’ tragic passing, this can now only be offered now as a celebration of a generous spirit whose presence will be sorely missed.