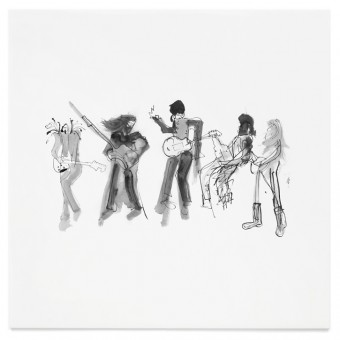 A new collaboration between these two heavy-weights, composed remotely across oceans and hemispheres over four years, the album draws on the languages of musique concréte, dub, blues, power electronics, free noise and at times even early Italian avant-garde composition (believe it or not). This entire work highlights the startling power of their individual approaches and the true potential only occasionally realized in collaborations of this nature.

“Stunning new collaborative LP from Bruce Russell of The Dead C et al and Norwegian Industrial metalist Lasse Marhaug: packaged and billed as a tribute to Roxy Music, Virginia Plane boasts some amazing Roxy cover art by Kate McRae and song titles lifted from the Roxy catalogue – “For Your Pleasure”, “Both Ends Burning”, “In Every Dream Home...” etc. Recorded and mixed over the space of four years this is a genre –straddling monster that at points comes over as a heavier, more brutally-nuanced take on Russell’s investigations of blues form, field hollers and primitive Americana on sides like Midnight Crossroads Tape Recorder Blues and 21st Century Field Hollers And Prison Songs. Some of the more barren tracks touch on NNCK circa A Tabu Two, with that same feel of abandoned railroad crossings in the American night, of dead signals ringing out over empty plains. Some of the harmonica work is particularly mangled, squoze through the kind of thunderous tumult of contemporary Whitehouse with protesting tones that sound like Dylan ’66 given a streamroller for a makeover. Marhaug brings the glam, playing a two-fisted fully-electrified Eno to Russell’s Dylan-via-Ferry-isms, levelling Russell’s blues gestures with beams of thick white light while making with torrential assaults of clattering almost New Blockaders-esque percussive noise over Russell’s two note electro dirges. The bottom end is particularly thick and sticky, more trunk slamming than junk glamming, while a track like “Pyjamarama” recalls the primitive electro-acoustic aktions of Akita and Null-era Merzbow. If Whitehouse’s Racket amplified the noise of primitive Africana then Virginia Plane hallucinates the dissonance of American blues to post-Industrial scale, closing with the magisterial single note drone of “In Every Dream Home…” that re-scores those endless Dead C run-out jams as a Nitsch-ean deal with the devil. A fantastic side from these two, very highly recommended!” – DAVID KEENAN, Volcanic Tounge

Mastered by Patrick Klem at Klemflastic Sound, Phoenix and cut by Rashad Becker at Dub-plates & Mastering, Berlin. Pressed in an edition of 500 copies. Made in USA

Bruce Russell lives and works in Lyttleton, New Zealand. He is a member of The Dead C, A Handful of Dust and founder of Corpus Hermeticum and Xpressway record labels.

Lasse Marhaug lives and works in Oslo, Norway. Working mostly within the fields of noise he is also a member of Jazkamer, Nash Kontroll, DEL and founder of Jazzassin and Picadisk record labels.