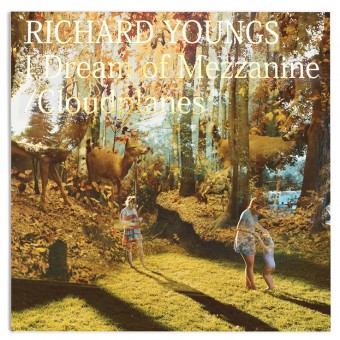 SP11 RICHARD YOUNGS – I Dream of Mezzanine/Cloudplanes
OUT OF PRINT

The Spring Press is very pleased to announce the release of a new masterpiece by the one and only Richard Youngs. A commanding new exploration of his interest in the composition of voice and electronics. Utilising motif and repition each work is rich, detailed and slowly developing, both tracks spanning over sixteen minutes each.

“One of Richard’s most singular works, with vocals, acoustic guitar, sleigh bells, tape, graphic equalizer, computer and epinette des vosges scored for two sidelong pieces. The beats are genuinely cracked, stumbling over each other, breaking in and out of rhythm… several layers of vocals, with distant electronically treated moans and expressionist breath functioning as a framework for the main vocal line with Richard’s classic/keening tone obsessing over mantric phrases, almost giving the album the feel of a more pastoral Throbbing Gristle. The second side has a more lunar, psychedelic appeal building on aspects of earlier No Fans releases pushing further into fully synthesized environments illuminated by those amazing vocals. One of the most lovingly packaged LPs of his career this far.”  – DAVID KEENAN, Volcanic Tongue