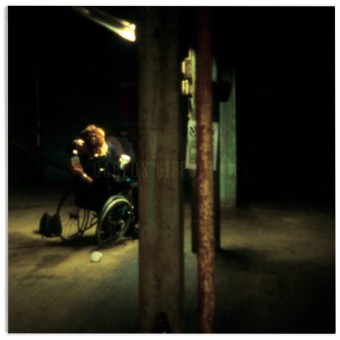 A new studio LP from this synth maverick. Primordial dance music comprised of pulsating analog rhythms and austere waves of mechanical tones. With beginnings in laptop electronics and his focus now turned toward analog synthesizers and modular manipulation, results vary from the extreme to the beautiful. Mastered by Casey Rice.

“On “First Steps in a ruined world”, he pushes this bleakness of vision further than ever into the noise territories he used to stalk in his pre-modular synth work… There’s physicality and momentum elsewhere, but by stripping back his music to its barest essentials, Giffoni has found a way to merge rhythm and texture, in the process creating a music whose sense of space and depth belies it’s economy of means. Over a concise four tracks, Giffoni projects a vision that revels in the idea of the synthesizer as a grimy, mud-encrusted machine whose function is to soundtrack a dystopian present rather than reference an idealised golden age or imagine a shiny ergonomic future.” – KEITH MONLINE, The Wire